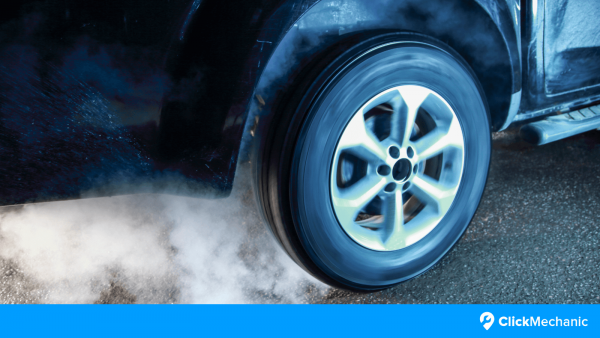 A burning rubber smell coming from the vehicle can be particularly concerning especially when you do not know the source of it. Besides the obvious burning smell of rubber tyres, there are a lot of other components in a vehicle such as leaking oil or coolant, electrical shorts, etc that can result in a burning smell. This article will cover the most common reasons and what should be done about them.

Most common cause of burning rubber smell

One of the most common causes of burning rubber is the smell of a faulty or slipping clutch. If the clutch is used inappropriately by the driver it can cause strain on the clutch system and cause it to slip. Additionally, over the course of time, the surface of the clutch disc can become worn and smooth, making it less able to grip the flywheel.

There is some friction involved, but riding the clutch means that the driver does not let the clutch completely engage the flywheel and keeps grinding against it which in turn creates excessive heat and starts burning the clutch itself. The combination of the friction material of the clutch and the heat will result in a burning rubber smell.

In this case, it is likely that the clutch will need to be replaced as soon as possible to ensure safe and smooth driving.

Brake pads contain synthetic materials which means that sticking brakes can result in a strong burning smell due to the excessive heat generated during a drive. It’s usually the brake caliper or the brake pads that cause this.

It can be a safety hazard so it’s advisable to get the brakes inspected by a trained mechanic as soon as possible who may advise you to get the components replaced before attempting to drive again.

If the serpentine or drive belt is not tensioned correctly, it will slip on the pulleys and cause the belt to overheat and smell like burning rubber. The drive belt has many components on its path and even a single part, such as a jammed pulley can cause extreme friction and damage other parts of the belt.

If you notice this smell along with some strange sounds from the engine bay then it’s critical that you get a mechanic to have a look at it as soon as possible. Continuing to drive with it in this state may cause the engine to overheat or worse, cause severe engine damage.

If you smell a burning or smouldering rubber smell coming from under the hood, it’s most likely an oil leak. When the oil drips all the way down to the exhaust pipe, the heat produced when the vehicle is driven releases a burning smell.

To fix this, a mechanic will have to look at the seals to identify the source of the leak. As soon as that is done and leaks are repaired, the burning smell should disappear.

Is it dangerous to breathe burning rubber?

Breathing in the smell of burning rubber is not fatal, however, inhaling the potentially toxic fumes can cause short-term issues such as headaches, dizziness and nausea. It’s best to steer clear of such smells and get it addressed as soon as possible.

Can I drive a car with a burning rubber smell?

If the burning rubber smell is coming from your car, it is not advisable to drive. There could be a problem with your brakes or a part of the engine or transmission system that is causing the smell. It is best to have a mechanic check your car out to find the source of the problem.