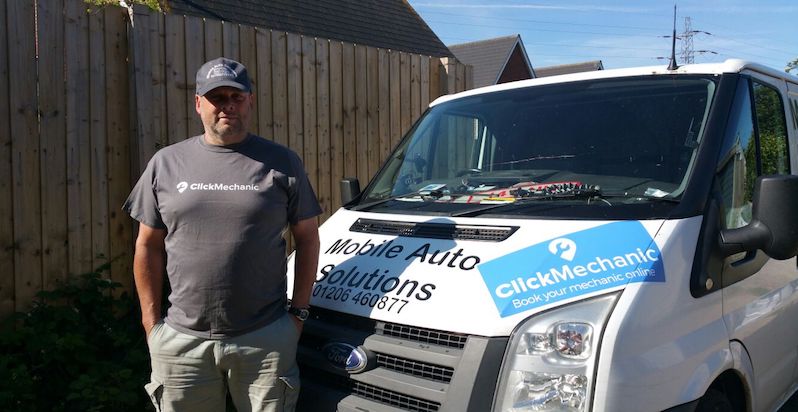 It’s the end of another month, time for us to choose another mechanic of the month. We thought long and hard about who next to treat with one of our popular hampers. This month we’ve made the decision to award our mechanic John from Colchester with this special honour. John has been with us since 2015 and in that time has done over 200 jobs. Taking his almost perfect 4.9 out of 5.0 review score into account it’s safe to say he’s one of our most reliable mechanics in the area.

How are you finding the ClickMechanic experience?

It’s been really really good for me. It kickstarted my career as a mobile mechanic, I was only doing it part-time before. With ClickMechanic it’s easy to accept jobs as it’s all pre-quoted, so you just click accept or decline. With other platforms there’s a lot of labour involved to get the jobs, as you need to do all the quoting yourself. Also, with ClickMechanic you definitely get paid for the job.

When did you become a mechanic?

It really started when I took my first car to garage when I was 17. They messed up the car, so I decided that next time I’ll do it myself. From then on I slowly started to work on other cars, but that was beside my day job working in a lab, doing genetics in Cambridge, I sequenced the mouse genome and played with stem cells. Around 7 years ago I started my own business, doing mobile mechanic work part-time initially, but went full time 4-5 years ago.

You have awesome reviews, is there anything in particular you do to accommodate customers?

Main thing I do is that I talk to customers. I discuss the job, but also talk about general stuff whilst I am doing my diagnostics. And people appreciate this.

Communication is a key part of the job. I always text customers shortly after accepting the job just saying who I am and when I will come, and then I text them on the morning of the job as well to say when I will be arriving.

What made you join Clickmechanic?

I think it was via a Facebook ad that I first noticed ClickMechanic, I hadn’t heard of the service before. At that time I wanted to go full time, so I gave ClickMechanic a ring to see what’s what. The fact that there was no initial outlay was great. It’s free to join, so I joined as I of course like anything free. It worked out smashing for me, and have been taking jobs ever since.

I really like the aspect of getting out and meeting interesting people. It’s great to hear so many different stories. Some time ago I did some work for an Apache helicopter pilot and the other week I worked on the car of an Apache mechanic!

I also really like the driving to and from jobs. There’s some smashing countryside where I have to travel through. I even get out of the van from time to time and take some pictures.

Of the cars you have owned, do you have a favourite one?

To be honest, I was very much into cars around 20-30 years ago, but now I really just like fixing them as a job. I’ve got around 6 cars at the moment but it’s mostly cars I’m not planning to keep, but rather to do up. In terms of a hobby I’m really more into motorbikes than cars. That said I quite like owning Land Rovers, they’re a bit quirky, fixing them is another thing! Most of them are just not very well put together, and will be rusty.